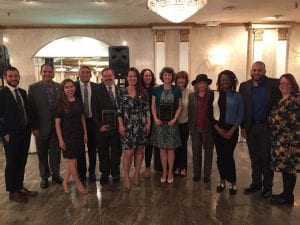 Over 50 members of the Powhatan and Pocahontas Regular Democratic Club gathered to elect their 2019-2020 executive board.

The club is a building ground for Democrats and people looking to be politically involved in their community. Members of Powhatan have organized political and community outreach-based activities, including phone banking, petitioning, canvassing, voter registration drives, debate watch parties, food drives, and clothing drives. They have worked together to elect candidates from the bottom of the ticket and up, from local Democratic district leaders to the president. Members have spoken to voters and helped fund-raise for candidates both in Astoria and in battleground states such as Pennsylvania and Florida.

The club has made it a priority to reach first-time voters through community outreach, events, policy-based discussions, and social media. Under the direction of the board, Powhatan will continue to grow new generations of political leaders and activists, help elect Democrats to office, engage with elected officials on a grassroots level, and shape the Democratic Party with Astoria’s voices.

The executive board includes:

Laura Jean Hawkins, Female Chair of the Board

Dirk McCall, Male Chair of the Board

“It is an honor to be the president of the oldest Democratic club in Astoria, and also being the first person of color in this position is extremely meaningful in this turbulent political climate,” said Andy Aujla, the newly elected president. He then added, “To create lasting change, we must engage neighbors in the political process at every level. I encourage everyone to get involved in grassroots advocacy with our club.”

Founded in 1901, the Powhatan and Pocahontas Regular Democratic Club represents the 36th Assembly District, Part A, in Astoria.