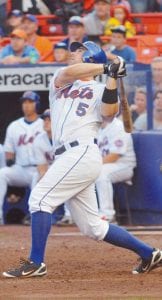 “It’s a very prestigious award and I am proud to win it, considering the people who vote for the award,” Wright, 25, who also won his second straight Rawlings Gold Glove Award this year said. “This honor will help motivate me to an even better season in 2009.”

Wright, who was picked to his third All-Star Team last summer, also tied a career-high with 42 doubles last year.

Wright became the first Mets player to accumulate four seasons with 100 or more RBI. In addition in 2008, he became only the third baseman in major league history to have 25 home runs in four consecutive seasons prior to his 26th birthday. The other two were Hall of Famer Eddie Mathews (1952-1957) and Eric Chavez (2000-2003).