‘Melt My Heart And Then My Brains’: Bill Popp and The Tapes Release First Record In Seven Years 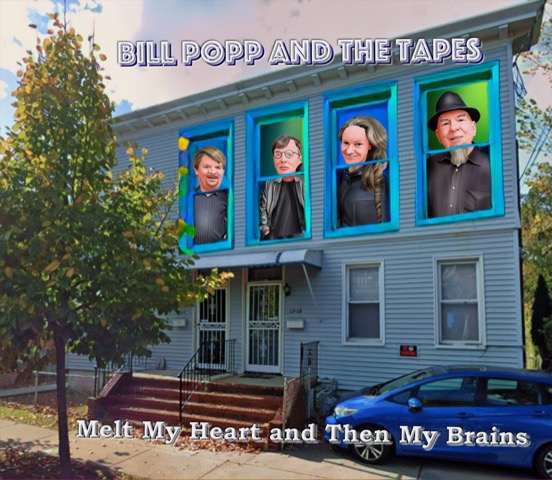 Edited in Prisma app with Aircraft

New York’s legendary popsters, Bill Popp and The Tapes, will celebrate their first record release in 7 years with a party at The Irish Whiskey Bar (28-48 31st Street, in Astoria) on Monday, February 21 at 7PM

For 41 years and counting, Bill Popp And The Tapes have been a fixture on the New York music scene. Since 1981, where the band played their first show at “Gerde’s Folk City,” the launching pad for acts as diverse as Bob Dylan and Sonic Youth, Popp has been recognized as one of the area’s most melodic songwriters. He has won critical acclaim in numerous tri-state and national publications, including Billboard and the New York Daily News. Music critic David Hinckley said, “In a perfect radio world, more people would know the music of Bill Popp.”

The new EP, “Melt My Heart And Then My Brains,” will mark the 12th release of Popp’s music. The last was in 2018, when Popp recorded solo. The band’s line up has stayed consistent for over 20 years with Gerry Barnas on Guitar, Roger Foster on drums and Mary Noecker on bass, contributing their backing vocals, as well as lead vocals at live shows. Bill Popp and The Tapes performs regularly in the New York and tri-state area, as well as in Europe. Popp has also performed solo in Europe as well as in Asia, South America and Australia. The new five-song EP, like the band’s previous records, will be released on 121st Street Records, Popp’s own label.

Over the years, with many Manhattan night spots closing their doors, Popp’s music found refuge in numerous venues in Astoria. “The Bohemian Hall, Shillelagh’s Tavern and The Quays, to name a few. One club in particular, The Irish Whiskey Bar, where Popp plays often, has also become a frequent watering hole for the seasoned singer, which inspired him to write a song about the place, called The Irish Whiskey Bar, and featured on the new EP.

With a track on the EP titled Irish Whiskey Bar, why not host the release party there as well?

Join the band there to celebrate the release of Melt My Heart And Then My Brains.

There will be a live performances by Bill Popp And The Tapes followed by special guest Finn And His Rustkickers, plus other surprise guest.

A splendid time is guaranteed for all. This event is open to the public. Food and refreshments will be provided.