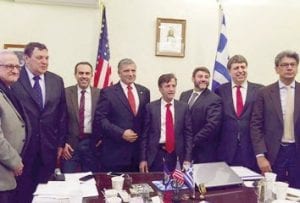 A major conference at the Federation of Hellenic Societies of Greater New York addressing the Refugee Crisis in Greece was held at the Stathakion Center on Friday, April 8, 2016, in Astoria, and a Proclamation was signed by most Hellenic American Societies in the United States to stop the flow of refugees into Greece, effectively assist in either repatriating the illegal migrants or have the European countries accept refugees according to quotas.

As stated in the Federation’s statement, the Greek refugee crisis is a critical topic which is becoming a humanitarian catastrophe. In the coming months worsening of the refugee crisis is projected because of the incompetencies of the Greek administration, the insufficient assistance from the European Union (EU), the EU closing its borders in Northern Greece, and the inhumane conditions the refugees are facing in camps. One million refugees/migrants passed through Greece in 2015 to find work in Northern Europe. Currently, there are at least 50,000 refugees/migrants in Greece, with 2.5 million awaiting passage from the western coast of Turkey. The EU is providing monetary aid to Turkey, but there is no concrete plan to assist Greece.

The Proclamation on resolving the Refugee Crisis in Greece is being presented to all implicated international centers of decision-making, including Washington, DC and New York in the United States, Brussels and Athens in Europe, Moscow and Ankara in Asia.

It states that the United States government can specifically help Greece by providing military support to stop the refugees from leaving Turkey, assisting in the humanitarian crisis of refugees in Greece, and maintaining the ceasefire in Syria.

The American citizens of Hellenic heritage and the Philhellenes seek to empower the democratic process in the United States to resolve the refugee/migrant crisis in Greece and seek urgent attention to this critical humanitarian crisis.

The Proclamation is as follows:

The Hellenic American Community of the United States of America, represented by the undersigned major Greek-American organizations, urges all involved parties to implement the following, in order to resolve the Refugee Crisis in Greece:

1) Greece must secure its borders and discourage human trafficking;

2) The United Nations, the European Union and NATO must support Greece in its extraordinary humanitarian efforts;

3) The United Nations, the United States of America, Russia and the European Union must help end the war in Syria and facilitate the immediate repatriation of the refugees to their homes;

4) The United Nations, the United States of America, Russia, and the European Union must provide financial support and public health measures to alleviate the plight of migrants and refugees stranded in Greece;

5) Turkey must stop the deliberate flow of refugees into the Aegean Sea that endangers their lives.

Issued on the 8th day of April, 2016 and undersigned by Hellenic American Organizations at the “Refugee Crisis Conference held in New York City at the Stathakion Center.