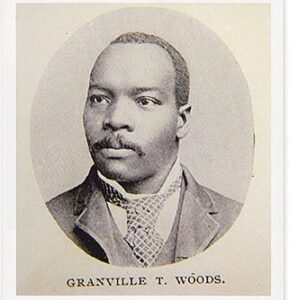 Granville T. Woods, an inventor, was featured in the April 1895 issue of The Cosmopolitan Magazine, which lauded his “innovative genius.”

Granville T. Woods, a contemporary of Thomas Edison, was called “the Black Edison” for his inventions in electricity.

Woods helped develop the third rail that powers our subways; the electrification of the Figure 8, a Coney Island roller coaster: and a wireless communications system that prevented train accidents.

In his 1968 book, “Where Do We Go From Here: Chaos or Community?”, the Rev. Martin Luther King Jr. cited Woods as “an expert in electric motors, whose many patents speeded the growth and improvement at the beginning of this century.”

But Woods’ race sentenced him to a life of struggle and, ultimately, to a pauper’s grave at St. Michael’s Cemetery in East Elmhurst, not far from where another contemporary, Scott Joplin, the Black composer of “The Entertainer,” is buried.

On Saturday, April 23, at 3 p.m., the cemetery honors one of its own in a special commemoration, with refreshments and snacks provided. (The address is St. Michael’s Cemetery, 72-02 Astoria Boulevard, East Elmhurst. For further information, contact 718-278-3240.) 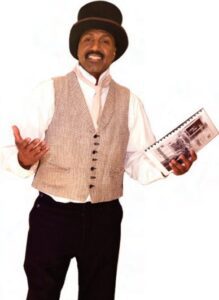 David L. Head, a historian and advocate for Granville T. Woods and other Black pioneers of transportation, appears in period costume to present the inventor’s life and work. On April 23, Woods’s birthday, Head is scheduled to appear at a Woods commemoration at St. Michael’s Cemetery (72-02 Astoria Blvd., East Elmhurst, Queens, NY), where Woods is buried.

April 23 happens to be Woods’ birthday, and in effect the inventor will come back to life in the person of David L. Head, author of “Granville T. Woods: African-American Communications and Transportation Pioneer.” (Available at dlhfoundation51@gmail.com).

At one point, Head assumes Woods’ voice to tell a rags-to-not-quite-riches story of inventive genius and thwarted promise.

Woods was born in 1856 in Columbus, Ohio, to a free family— his mother was a washerwoman, his father a sawyer. He left school at age 10. Enthralled by trains, he got a job in a railroad shop and learned about metalworking and mechanical engineering. Later he worked as a fireman for a railroad, shoveling coal into steam boilers before being promoted to engineer. 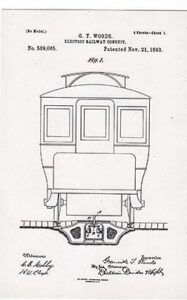 In 1893, Woods patented an “Electric Railway Conduit,” a prototype of the third rail that would power the subway. Photo credit: Charles Denson

The self-taught Woods always tinkered, imagining how things might work better. Then he turned to inventing. His first U.S. patent, in 1883, was for a steam boiler furnace (with which he was deeply familiar from his railroad days).

But Woods prophetically envisioned that electricity was the future, and he went on to win 44 more patents, including for an “electric railway system,” “chicken incubator” “amusement park apparatus” and “automatic air brake.”

In 1891 Woods moved to New York City and found a niche for himself as an inventor, partly through connections with General Electric. But he was often embroiled in court over the rights to his patents.

“For Woods, patents did not produce economic rewards; they only represented unfulfilled dreams,” writes Rayvon Fouché, a Black professor of American Studies at Purdue University, in his book, “Black Inventors in the Age of Segregation: Granville T. Woods, Lewis H. Latimer and Shelby J. Davidson.” 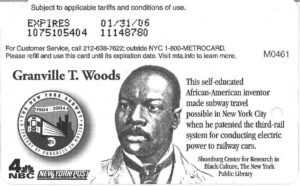 In 2004, for the centennial celebration of the New York City subway system, the MTA issued four million MetroCards commemorating Woods.

“Woods’ life—at times closer to a nightmare than the American Dream—clearly illustrates the harsh realities of being a Black inventor at the end of the 19th century,” Fouché noted.

Woods married in 1890 but his wife filed for divorce a year later. He died of a cerebral hemorrhage in 1910, impoverished.

In the gradual rediscovery of Black history, Woods has gained respect. P.S. 335 in Bedford Stuyvesant has been named the Granville T. Woods Elementary School. Western Electric commissioned a bronze marker for his unmarked grave at St. Michael’s Cemetery in 1975.

Nobody has done more to promote Woods’s legacy than David L. Head, who learned about the inventor while writing for the Transit Workers Union Black history committee.

Head first came to Woods’ grave in 1998. “I knelt there and wept,” Head recalls, “and I prayed to the Universal Spirit that I might learn more about this man.”

Just before Woods died, he sent a letter from an address on West 99th Street in Manhattan, a block from St. Michael’s Church, which still maintains the cemetery bearing its name. During the early 20th century, the church maintained an outreach program to the African-American community. Most likely, that’s how Woods ended up at St. Michael’s Cemetery.

Head lobbied for Woods to be honored at the centennial of the New York City subway in 2004—and the MTA issued four million Metro-Cards commemorating Woods. Woods was inducted into the Coney Island Hall of Fame, and an adjacent street was renamed Granville T. Woods Way.

What compels Head to crusade for Woods? “Ever since I was in elementary school I’ve been reading history,” Head says. “And I kept wondering, where are the Black people in the story, beyond slavery? I felt invisible and inferior. That has driven my passion to tell the untold inspirational stories.”