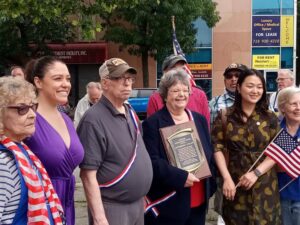 The 52nd Annual Flag Day Parade presented by the Kiwanis Club of Sunnyside on June 11 promptly began at a brisk pace under the threat of rain that fortunately did not materialize.

The procession was led by New York State As­sembly Member Catherine Nolan who served as the Grand Marshal. As I approached Greenpoint Av­enue, I heard the Sunnyside Drum Corps flanked by Tony Lana guiding and drumming in step with all of the youngsters. The Fire Department and Po­lice Department were both on hand. Row upon row of community groups were in line including the NYPD Color Guard; Veterans of Foreign Wars Post 2813 and VFW Ladies Auxiliary; Saint Teresa’s Youth and Young Adult Ministries; Saint Raphael’s Church Food Pantry; Boy Scout Troop 390; Man­hatitlan Mexican Folkloric Dance Club; a classic car from the East Coast Car Association. The Sun­nyside Community Key Club, Queensboro Football Club and Public School 199Q were also repre­sented.

Neighborhood residents lined the parade route snapping photos and cheering the marchers on as they headed toward the Veteran’s Memorial Square Sabba Park. As the parade entered the park an honor guard stood next to Marc Leavitt who was playing a patriotic tune on what appeared to be a fife. The Master of Ceremonies, Dr. Gerald Leder­man of Kiwanis gave a welcoming address along with Peter Ross, followed by the Pledge of Alle­giance and a beautiful rendition of the National An­them by Beatrice Ross of Woodside. 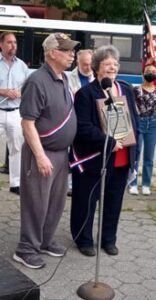 President of the Kiwanis Club of Sun­nyside Howard Brickman made the presentation of a Lifetime Achieve­ment Award to this year’s parade Grand Marshall NYS Assembly Mem­ber Catherine Nolan, describing her as “a pillar of the community for her thirty-eight years of dedicated serv­ice.” Photos Edwin Cadiz

Lederman stated that this was the first parade in three years. He said: “We thought that it was im­portant to do this and we will have a moment of si­lence to acknowledge what people have been going through and to honor those who defended our coun­try and who passed away during the pandemic.”

Rev. Father Paul Kim delivered the invocation and referred to the community’s diversity saying: “This is what divinity in America looks like. We worship in different religions and this is what our flag stands for. As Americans we recognize that the flag is a symbol of hope. We, as a nation, stand under one flag. Ours is an immigrant church; tradi­tion and faith being united, as we remember those men and women who fought for our country.” 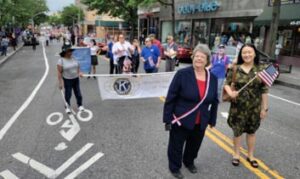 Grand Marshal NYS Assembly Mem­ber Catherine Nolan, and Council Member Julie Won pause for a pic­ture. Behind them is the Kiwanis Club banner.

The scene was one of civic pride and an affirm­ing commitment to values and traditions of com­munity life. As I walked around, I was able to ask many of those in attendance what they felt was most meaningful about Flag Day this year.

Assembly Member Nolan previewed some of her upcoming remarks referring to an original draft of the “Four Freedoms Speech” by FDR saying, “In the context of so much unrest in society, it is impor­tant to talk about these key things.”

Brent O’Leary referred to the Flag Day celebra­tion saying, “it means everything; the rights and principles we stand for. It is important that we stand up for these principles.”

Johanna Carmona reflected on the opportunities that the flag symbolizes, saying: “This is a diverse and welcoming community. I can recall that my parents came to this country and didn’t speak the language, but they made it possible for me and my sister to have a better future. Their sacrifices made it possible for me to go on to become an attorney and to run for office.” 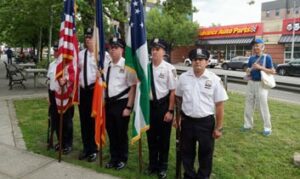 Following a recording of “Taps,” “Amazing Grace,” and a dance performance by the Manhatit­lan Mexican Folkloric Dance Club, Assembly Member Catherine Nolan of Assembly District 37 addressed the group with spirited remarks offering her thanks to well-wishers who helped her through a health challenge. She said: “It has been my great pleasure to be with you today. I feel good, and in preparation for being here today, I looked up an old poem that says that the flag is the flower of our lib­erty.” She went on to highlight the “Four Free­doms”— Freedom of Speech; Freedom of Worship; Freedom from Want; and Freedom from Fear;” adding “In our great country, we are blessed.” 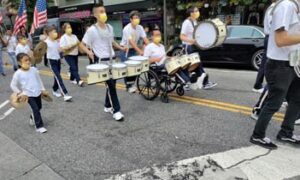 Council Member and Deputy Leader Julie Won serving Long Island City, Sunnyside and Astoria shared that she is a first generation South Korean immigrant for whom America was the dream of her ancestors. She thanked the NYPD “for keeping our community safe,” and thanked the veterans for their service.

Finally, Howard Brickman made the presenta­tion of a Lifetime Achievement Award to Nolan, describing her as “a pillar of the community for her thirty-eight years of dedicated service.”

The Flag Day Parade was clearly very mean­ingful and expressed the themes of past, present and future. I found it most notable that there were many children in attendance and this, to my mind, served to model for them the importance of celebrating this symbol of freedom and liberty. They watched and listened and I would like to think that they were im­printed with the value of these foundational ideals. It is also my hope that they will carry on this tradi­tion and pass it on to their children and grandchil­dren, just as others did for us because that is where I learned it as a child when the celebration was about floats, church groups and community people. 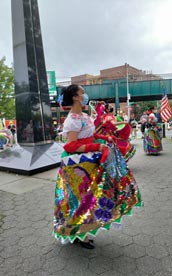 As I stood in Sabba Park, I noticed the monu­ment “To Our Glorious War Heroes” and the fol­lowing inscription of a quote from General Dwight D. Eisenhower which serves to define the impor­tance of the day: “All who shall hereafter live in Freedom will be reminded that to these men and their comrades we owe a debt to be paid with grate­ful remembrance of their sacrifice and with high re­solve that the cause for which they died shall live eternally.”