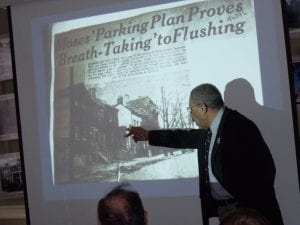 Photos Jason D. AntosMacedonia A.M.E. Church historian Jay Williams gave a slide lecture covering the long history of this congregation, located in the heart of downtown Flushing. He spoke about the church’s architectural qualities of the multiple churches that had previously existed on the site before the current church was erected, as well as the ties it was believed to have with the Underground Railroad.

For many Flushing residents it has simply become known as “that little church in the middle of the parking lot”. But for a small remaining group of lifelong Flushingites, they can remember a time when the church was located in the middle one of the largest African-American communities in Queens.
The Macedonia African Methodists Episcopal (A.M.E.) Church is celebrating its 200 anniversary this year. In honor of its bicentennial, Jay Williams, church historian, is conducting a yearlong history and slideshow presentation discussing Macedonia’s long illustrious history.
“What many folks don’t realize is that before we were a church, we were also a community,” Williams said during one of his lectures at the Queens Historical Society.
It was standing room only during the February 20 event where Williams treated everyone to rarely seen photographs of Macedonia and the neighborhood that once surrounded it.
Rebuilt several times during its history, the earliest records available show that the trustees and members of the African Methodist Society of Flushing, the forerunner of the present Macedonia AME Church, purchased land for the original site for Macedonia in 1811. It is believed that the society was actually formed in the late 18th century by free blacks, Native Americans and Quakers.
After many years of holding services in private homes and a blacksmith shop, the first church building was erected in 1837 near the present site off Union Street.
In 1821 that Macedonia received its first appointed A.M.E. minister, the Reverend Henry Heardon. At the turn of the century, the newly appointed Reverend Charles J. Lawton was determined to make Macedonia a strong influence in Flushing. He worked alongside the men of the church to build a new building that sat on a brick foundation. The bricks were used and the women of the church cleaned each one by hand. This building served the members and the community for over thirty years. A new building inspired new ideas and the women of Macedonia had their own vision. It was under Rev. Lawton’s pastorate that the Missionary Society and Stewardess Board No. 1 was formed.
Williams explained that between 1905 and 1928, Macedonia continued to grow under very capable leadership. In October 1928, the church received a new pastor who would prove to be one if it’s most influential, the Reverend William McKinley Dawkins. When he arrived the church building was in a dilapidated state and did not have a parsonage.
During his time as pastor, membership grew to more than five hundred and Macedonia held the largest prayer meeting in the New York Conference. A new building, complete with interior renovations, was dedicated on February 14, 1932. The Great Depression was oppressing the nation, but Dawkins was able to inspire the members to organize many of the clubs and auxiliaries still in place today.
Macedonia is located in an area of Flushing that was nicknamed “Black Dublin” because of its large Black and Irish community. This all changed when city officials identified the community as a slum and proceeded to implement a plan designed by then Commissioner of the Department of Parks and Recreation Robert Moses, to build a parking lot and bus station. Not only homes, but also the little red schoolhouse built in 1861 by the Flushing Female Association, despite its landmark status, fell to the wrecking balls.
The community was scattered, leaving behind only Macedonia as a reminder of the proud African-American heritage of Flushing.
The name A.M.E. originates from the word African, meaning that people of African descent and heritage organized the church. It does not mean that the church was founded in Africa, or that it is for persons of African descent only.
“All persons are welcomed and A.M.E. Church has become a multi-racial, multi-cultural institution,” Williams said.
The church’s roots are of the family of Methodist churches. Methodism provides an orderly system of rules and regulations and places emphasis on a plain and simple gospel.
Episcopal refers to the form of government under which the church operates. The chief executive and administrative officers of the African Methodist Episcopal denomination are the bishops of the church.
The flag of the A.M.E. Church depict an anvil and a cross. The anvil represents the church’s humble beginnings in the blacksmith shop. The cross is plain and does not feature a crucified Jesus Christ for the congregation felt to show him on the cross would be to deny that he rose from the dead after three days, the very foundation of the Christian religion. 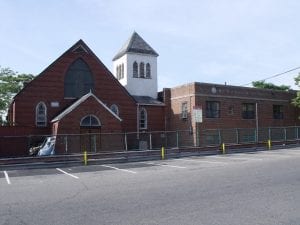 The Macedonia A.M.E. Church located within Municipal Lot 1 in the heart of downtown Flushing. The steeple was erected over the original graveyard.