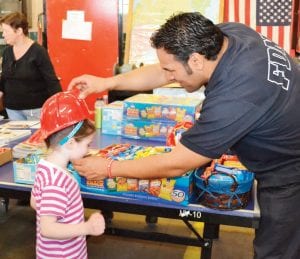 A Whitestone youngster receives a gift from one of the firefighters at Engine 295/Ladder 144.

The firehouses of New York City opened their doors to the communities they serve in celebration of the agency’s 150th Anniversary.

In a rare citywide open house event, guests got an opportunity to see how New York’s Bravest live and work.

More than 200 firehouses and EMS stations throughout the five boroughs were opened to the public from 11 am and 3 pm on May 2.

Youngsters were treated to free miniature fire helmets, coloring books and had their photographs taken aboard the hook and ladder rigs.

Firefighters also slid down the fire pole to the amusement of all present.

In Whitestone, residents flocked to Engine 295/Ladder 144 (nicknamed “The Whitestone Eagles”) lining up 15 minutes before the doors were even opened, to show their support for the firefighters, paramedics and EMTS who keep the community safe.

The Fire Department of New York was established on July 31, 1865.—Jason D. Antos